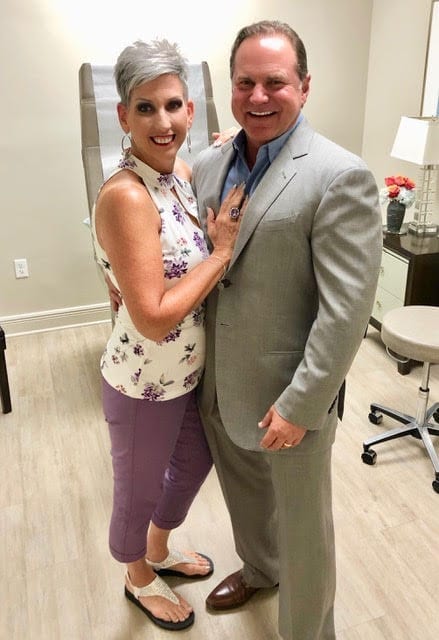 I have started this post about 7 times. And deleted it. It was difficult to revisit those dark memories from 2016-2018. So, I did what I always do—talked it over with God and asked for His direction. He revealed to me this morning that I was viewing things from the wrong perspective. Yes, I have anxiety/panic-triggering memories connected to my bilateral nipple/skin sparing mastectomies. However, I was revisiting that time through the eyes of the “cancer patient” instead of a “restored woman of God!!”

Here is the journey of my Delayed Breast Reconstruction:

My diagnosis was Stage 2 Invasive/Aggressive Ductal Carcinoma with 2 positive lymph nodes. I had received breast implants as my graduation gift from nursing school in December 2015. I loved having DD breasts! I felt so much more confident. That is why I struggled with the surgeon to not do immediate reconstruction.

As a nurse, I immediately began researching and reading everything I could find about mastectomies, chemotherapy, radiation therapy. Knowledge is power. Asking questions about the surgery and my treatment plan was my way of somewhat taking control over what would be done to my body. As with any search on the internet, I had to search cautiously and on trusted websites. That is when I found www.breastcancer.org and read about Skin Sparing/Nipple Sparing Mastectomies. I had never heard nor read about it.

At my next appointment with my surgeon I arrived with my detailed list of questions, including “Am I a candidate for the Skin/Nipple Sparing Mastectomies?” My surgeon was taken back and somewhat speechless at my question. He knew about them, but never included it as an option!!

On December 19, 2016, our youngest son’s 23rd birthday, I had both breasts removed via the SS/NS method. I was sent to the plastic surgeon that would “reconstruct” my breasts before my surgery and was told he could reconstruct me before beginning chemotherapy on January 12, 2017. Not true. I was devastated.

That prompted me to decide to interview surgeons that had been recommended to me by others. By then it was April 2017. My husband and I narrowed the list to three surgeons to interview about my reconstruction. Two were eliminated as soon as we left their office. One promised me the “world” during his consultation. So I made the choice to choose him based on his promises.

Fast forward to August 2017 when I was in the middle of my 30 days of radiation. I had both a nurse and my radiation oncologist tell me several times during the course of my treatment that I would probably lose my left nipple. They said that the radiation would make it “unusable.” I wept uncontrollably. I know you’re thinking… Jackie, it’s just a nipple! And I thought the same thing, but it was more than that. I wasn’t ready to lose another part of my body to this hateful cancer.

I went mid-August for another visit with the plastic surgeon that had promised me the world back in April. During this visit, however, his nice disposition changed completely. He told me that he would have to perform complete mastectomies and put in sizers via the TRAM flap route.

I was completely crushed. When I left his office that day, I never returned.

By now I was so wounded—defeated—and felt as though I had no other options available.

God was waiting for me to exhaust all of my options so He could bring me to the place He had chosen for me. In mid-October, I discovered the Center for Restorative Breast Surgery on Facebook. After looking at every inch of their website, I nervously messaged them on Facebook. That message led to a phone call from a kind nurse at the Center. A few days after our conversation I received a handwritten “thank you” note from the nurse! I’m a Southern woman, and I can tell you that meant so much to me! I’m all about a handwritten note.

I spoke to several people at the Breast Center leading up to my consultation with Dr. Sullivan on January 2, 2018. I want to list their names but fear I would leave someone out. Each time I spoke to someone on the phone it replaced my anxiety with such a calm feeling. Everyone involved at the Center is so compassionate and kind. That morning, Dr. Sullivan came in, sat down, and simply asked, “What are your goals for your reconstruction?” A simple question requiring a simple answer. I wept. Up until now, a doctor had not asked me what my goals were.

After my examination, he explained that he thought the DIEP flap was best for me. When my husband and I left for home that day, we had HOPE. God kept His promise that He would “Restore what had been taken,” and that is exactly what He has done through Dr. Sullivan and his amazing team. Honestly, they had me at the spa music playing in the exam room, fresh flowers everywhere, and those incredibly soft fuzzy socks! Yes, I kept every pair.

My Stage1 Reconstruction was March 27, 2018, and I cried when I left the hospital because all of the nurses (pre-op and med-surg), CNA’s, food service personnel, and everyone were so kind. I have never been shown such kindness from people before. I also cried every time the nurses came to check my incisions, around the clock, following my surgery because I was wearing a BRA!!! A gorgeous black (my favorite color) surgical bra! It was the first time in 1 year and 3 months that I had one on, and it was glorious!!

My Stage 2 Reconstruction was July 24, 2018. Once again, consistent kindness from check-in to discharge home. After my body healed I didn’t recognize my reflection once again, except this time, I was blown away by the results. Beauty that radiated from the inside out!

When this journey began, I thought I would never regain confidence of my outward appearance. I had gained 40 pounds from six months of life-saving steroid/chemotherapy infusions. I pretended to feel confident and beautiful, however, I felt so ugly and defeated. Delaying my reconstruction was hard—very hard. However, it ended up being the biggest blessing! I shudder to think how my body would’ve looked had I trusted one of those other plastic surgeons to reconstruct my breasts.

Thanks to Dr. Sullivan, his team, and all of the people at the Breast Center, I have my confidence again…in spades!!!!!

If your reconstruction was delayed, know that you don’t have to settle for anything less than AMAZING results!! The Center for Restorative Breast Surgery has surgeons that can, and will, restore your confidence.