Immunotherapy Is Finding A Place In The Treatment Of Breast Cancer 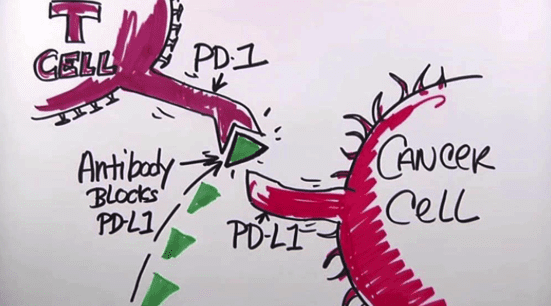 For a tumor to grow or progress, the cancer cell must evade the immune system. In the past, it was thought that only melanoma and kidney cancers would respond to immunotherapy or treatment that affects the immune system. In recent years, our knowledge of the immune system has grown exponentially. When cancer cells develop in our body or when bacteria or viruses invade our body, we have developed a mechanism for mounting an attack on these foreign cells. The cells in our body which attack other cells that it deems alien are called white blood cells. Amazingly, there are many types of white blood cells. For our discussion, the forms of white blood cells important in cancer are T-cells and B-cells, particularly T-cells. T-cells are present throughout our circulation. When it discovers a cell which it thinks is invading the body, it probes the cell with a protein called PD-1, to see if it is foreign to the body (see drawing above). If so, an attack commences. But cancer cells have developed a mechanism to fool the T-cell. That mechanism is a protein that exists on the cancer cell wall called PD-L1. If PD-L1 successfully prevents an attack from the body, the cancer cells can grow unimpeded, and subsequently, cancer grows.

Recently, scientists have developed drugs that will block a cancer cell from this type of attack using the protein, PD-L1. These drugs are called checkpoint inhibitors. In 2020, the results of a clinical trial were published using a checkpoint inhibitor. These drugs have been used previously but mostly in patients whose cancers were triple-negative (estrogen receptor-negative, progesterone receptor-negative, and Her-2 negative). Thus far, checkpoint inhibitors have not been used in estrogen receptor-positive cancers (approximately 70% of all breast cancers). In this most recent clinical trial, both triple-negative breast cancers and estrogen receptor-positive breast cancers were treated. Preoperative treatments were carried out using the checkpoint inhibitor pembrolizumab plus standard chemotherapy. A total of 69 patients were randomized to receive either chemotherapy alone or chemotherapy plus pembrolizumab. The researchers were looking for what is called a complete pathologic response. That is that the preoperative treatment results in all signs of cancer to disappear.

The results of the study showed that there was a better response to chemotherapy plus pembrolizumab when compared to chemotherapy alone. There was not enough time nor patients to determine whether there was a survival advantage when taking chemotherapy plus the checkpoint inhibitor. However, there is excellent news. This study shows that immunotherapy is effective in both estrogen receptor-negative and estrogen receptor-positive tumors. Previously, only estrogen receptor-negative had thought to be the response. The even better news is that pembrolizumab was the first of 10 checkpoint inhibitors to qualify for use in hormone receptor-positive tumors! With time and with these new drugs, we can expect better results from immunotherapy going forward.