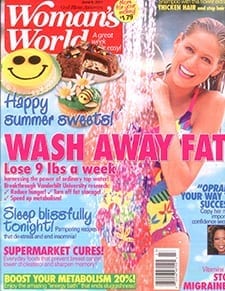 “I feel good about me again!”

We’ve all had days when we’ve looked in the mirror and not been thrilled. But every day was like that for Liz Anderson. Until she found a groundbreaking surgery that is helping breast cancer survivors feel beautiful and whole again…

Her heart pounding, Liz Anderson stepped up to the mirror in her Naples, Florida bedroom. “You can do this,” she whispered and, taking a deep breath, carefully began removing the layers of gauze that covered her chest. Liz had tried to prepare herself for this moment. She’d even gone online and viewed pictures of other women who’d undergone mastectomies. But seeing her body as the last of the bandage fell away, Liz’s breath caught; her knees went weak. Grabbing hold of the dresser to steady herself, she met her gaze in the mirror. “It’s okay,” she told herself. “You had to do this.” But while it was true that the surgery had saved her life, Liz despaired: How can I spend the rest of my life looking like this? Liz had always been fit and healthy and did everything she could to make sure she stayed that way – including going for annual mammograms. She’d always gotten good reports. Then, in April 2009, the radiologist told Liz, “I see something in your left breast.” Liz tried not to panic. But when the biopsy revealed the “something” was malignant, her whole body started shaking. “What do I need to do to fix this?” she asked, her voice small. Because the cancer was scattered throughout her breast, a mastectomy was her only option. And because it was extremely aggressive and an MRI showed a calcification in her right breast, Liz told the surgeon, “Take both.” “I figured it was my breasts or my life,” she says, “And I could live without breasts.”

Desperate to feel normal
But now, seeing the two scars – one on each side of her flattened chest – all Liz could think of was what wasn’t there “Look at me,” Liz whispered, her voice breaking as her husband, Tim, came up beside her. Tim’s eyes met hers. “I love you,” he said. “You’re here. That’s all I care about.” Being able to grow old with Tim was more important than anything. Still, Liz, then 46, asked her doctor about reconstructive surgery. “I don’t recommend it,” he said, explaining that the radiation treatments she’d need after chemotherapy would damage the tissue, increasing the risk of scar tissue forming and hardening around the implants. If that happened – and he felt strongly it would – she’d suffer with constant pain and distortion of the breast. This is so unfair, Liz thought. She needed radiation to beat cancer, and yet because of it, she’d never be free of the reminder of cancer – not when, every time she looked in the mirror, she saw a reflection of everything it had stolen from her. And while prostheses helped her fill out her clothes, the silicone forms were hot and uncomfortable in the Florida heat.  And when Liz started chemotherapy, she not only felt sick and exhausted, but every day she would find more of her once long, thick red hair on her pillow and in the shower drain. Finally, with tears streaming down her face, Liz shaved off what was left. Seeing her bald self, with no breasts, her eyes blurred with tears. I may be beating cancer, she thought. But will I ever feel whole again?

“I have my body back!”
Then one day nearing the end of her radiation treatment, Liz’s regular radiologist was out and the technician filling in asked if she’d considered reconstruction. “I was told I shouldn’t have it because of these treatments,” she said. “Not implants, maybe,” he said, “but there may be another option.” He told Liz about another patient who, after radiation, had undergone a groundbreaking reconstructive surgery in which they’d used fat from her own body to make breasts. That’s possible? Liz wondered, feeling a rush of excitement and hope. And after meeting with the woman and talking it over with Tim, she decided: I’m going to do it. Soon after, Liz visited the Center for Restorative Breast Surgery in New Orleans, where she met with plastic surgeon Frank DellaCroce, M.D. After examining Liz, he determined that the best “donor site” to take skin and fat from would be her buttocks. But she’d have to wait until her body had healed from chemotherapy and radiation to undergo the procedure. Finally, six months later, Liz got the go ahead. Dr. DellaCroce had to remove enough skin and fat to create two breasts from the upper part of Liz’s buttocks, along with two arteries and veins the supplied blood to the tissue. Next, using half of the tissue, he formed a breast and placed it under the right side of Liz’s chest wall, and reconnected one of the arteries and veins to blood vessels near the site. He then repeated the process to reconstruct her left breast. Liz spent just one night in recovery. And the next day, as she stood nervously in front of her hospital room mirror, carefully removing her protective post-surgical bra, she cried, just as she had post-mastectomy. But this time, they were happy tears! “Gotcha, cancer!” Liz exclaimed triumphantly. Today, Liz is completely healed. “I have my body back,” she marvels. But the truth is, it’s what the surgery did for her on the inside that she’s most thrilled about. “Every woman needs – and deserves – to feel good about herself. And for the first time since hearing the word ‘cancer’, I feel good about me!”

We are a dedicated and specialized resource founded for women affected by breast cancer and those seeking the most advanced methods of reconstruction. Our knowledgeable and compassionate team is here to help you learn about the care options available to you at the Center for Restorative Breast Surgery.

OUR TEAM IS HERE FOR YOU. During these challenging times we remain available and committed to assisting you promptly and professionally. We are online and ready to assist with navigation through your questions about breast cancer care and reconstructive surgical options. Click here to connect with our Care Team via email, phone, or LIVE Virtual Consultation.