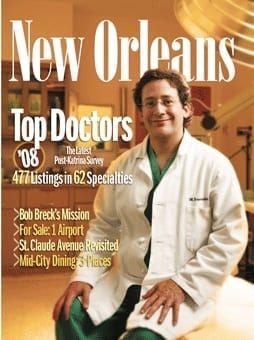 More than 180,000 women in the U.S. will face a diagnosis of breast cancer this year the American Cancer Society estimates. Each case will be unique, but doctors who treat the disease say most of these women have one wish in common: To get through their treatment and put the unhappy episode behind them.

In the past that desire was difficult to satisfy. Surgery often left women feeling mutilated, with scars where their breasts once were. The scars were a constant reminder of what they had gone through, says Dr. Frank DellaCroce, co-founder of the Center for Restorative Breast Surgery. He and his partner, Dr. Scott Sullivan, both board-certified plastic surgeons, opened the Center at1717 St. Charles Ave., several years ago and became well known throughout the U.S. and beyond for their expertise in reconstructive surgery.

Today they’re expanding their reach, adding a 60,000-square-foot, 17-bed hospital that will include six operating rooms and the capacity to handle all types of breast reconstruction. The hospital is slated to open early next year.

Why build their won hospital? “We can control all variables, all facets, everything will meet our standards.” DellaCroce says. That means each aspect of patient care, from the most sophisticated equipment to the sconces on the wall, will be carefully selected to enhance the patients medical and emotional experience. DellaCroce and Sullivan say studies show that patients surrounded with a soothing, healing environment actually recover faster with fewer complications and seem to have less pain.

The attention to detail begins in the clinic’s waiting room, which features a quiet fountain, soft lamplight, fresh flowers and furniture that would be right at home in an upscale hotel. The color scheme of soft blues, greens and tans is calming, as is the artwork. The clinic worked with New Orleans artist Emery Clark to carry out the theme. A smaller waiting room is available for patients who need a little more privacy.

These same touches will be found in the hospital, where high-thread-count sheets, luxury bath products, spa robes, and catered meals will be standard. Every effort will be made to keep medical equipment as unobtrusive as possible. For example, the needle boxes required to hold “sharps” are usually bright red: here, they’ve been covered in pale green.

Providing such extras is expensive, the doctors concede. Insurance companies are required by law to cover the cost of breast reconstruction after mastectomy but DellaCroce says the hospital may have to accept a smaller profit margin.

Behind the beautiful surroundings, the hospital will see patients dealing with some tough decisions, such as whether to have a lumpectomy or a mastectomy, or when to undergo reconstructive surgery.

Mastectomy accompanied by reconstruction has become the industry “gold standard,” Sullivan says, for a variety of reasons. Lumpectomy has been billed as a way to preserve a breast while removing cancer the operation can be disfiguring depending on the amount of tissue removed. Additionally, the recurrence of cancer with lumpectomy is about 10 percent, he says.

DellaCroce and Sullivan say that about 90 percent of patients elect to have a bilateral mastectomy – removal of both breasts – thereby doing away with the constant worry that cancer will be diagnosed in a remaining breast. “You get rid of that specter in the closet,” DellaCroce says. This option is especially appealing to younger women.

Now that genetic-testing for breast cancer is available, women faced with a greatly increased probability of being diagnosed with the disease sometimes choose to have the double mastectomy as a precaution. This decision is more popular today because of the improvements in breast restoration, DellaCroce says, “We can deliver your breasts back to you.”

Opting for immediate reconstruction, rather than waiting five years after the mastectomy, is also the best choice, Sullivan says. The results are better and contrary to a common myth, reconstruction doesn’t interfere with the monitoring of a patient’s health. Sometimes patients have preoperative chemotherapy to shrink the mass before surgery. It is uncommon that radiation is needed after bilateral mastectomy, DellaCroce says.

Sullivan and DellaCroce say new methods of operating have allowed them to leave hundreds of women with natural-looking breasts without disfiguring other parts of their bodies. In the past, doctors harvesting tissue from a patient’s abdomen to reconstruct a breast often left the patient with weakened abdominal wall muscles. Today, the DIEP Flap procedure enables surgeons to perform a “tummy tuck” on the patient – harvesting skin and fatty tissue form the abdomen without impairing the abdominal muscles. The Center pioneered a procedure called the Stacked DIEP Flap, which is used on thin women. Other reconstructive procedures take tissue from the upper or lower hip and buttocks. They can also perform nipple-sparing mastectomies, during which breast tissue under the skin and nipple is removed, followed by reconstruction.

Post-Katrina, the doctors considered building their hospital elsewhere, rather than commit to an expensive project in a city with an uncertain future. But in the end, they decided to build the hospital adjacent to the clinic, hoping to signal to the county that New Orleans is a good place to invest.

“New Orleans needs a breath of life,” DellaCroce says. “The city and the people have been beaten down. Here is something positive, a canter delivering the highest standard, drawing people from Los Angeles, Boston, Israel. There’s a little spark. Maybe that means something.”